10 Photography Tips for Farmers and Foodies

I recently taught a couple of workshops on photography and videography for beginners to some of our communicators. It’s amazing how advanced technology allows us to produce good photography by just knowing some of the basics.

Now does this mean that you will never need a professional photographer – absolutely not! Professionals have thousands of hours of training and can see things that you and I would never catch. And I don’t claim to be an expert at this at all. I’m just passing along the basics that I’ve learned and that I believe will help you capture better photos while you are on the farm or at the restaurant/market.

Here are 10 tips that I’ve picked up on photography – I hope they help you out.

You need good lighting. What makes good lighting? Indirect natural sunlight is awesome. Then after that sunlight. Gray days can be really good as well because they will make the shadows less harsh. 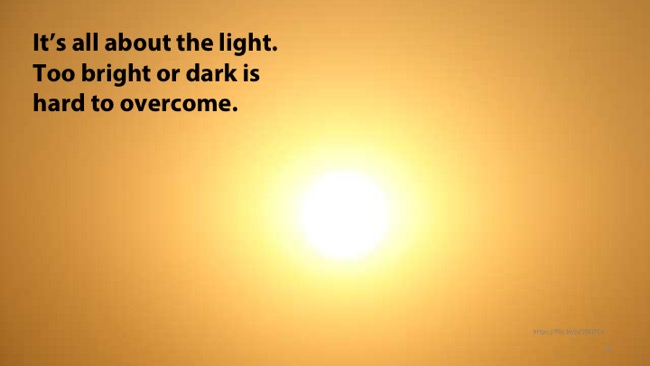 Check out the natural light vs. the in-camera flash on food. It can make the food look unnatural or look like it’s floating in space. Look how much texture gets blown out because of the light source. 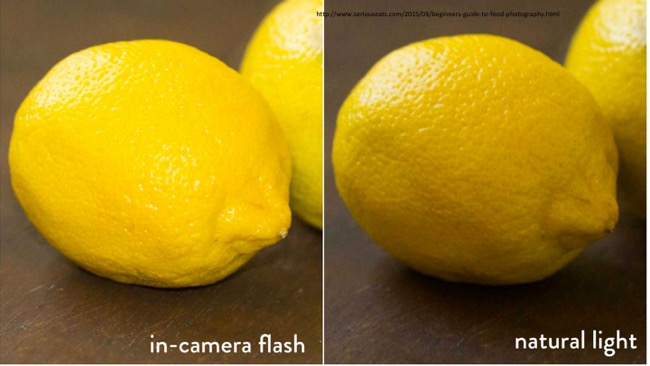 I loved the article on “Beginner’s Guide to Food Photography” from The Serious Eats Team and I recommend you check it out.

2. Look at the background first and add depth if you can. 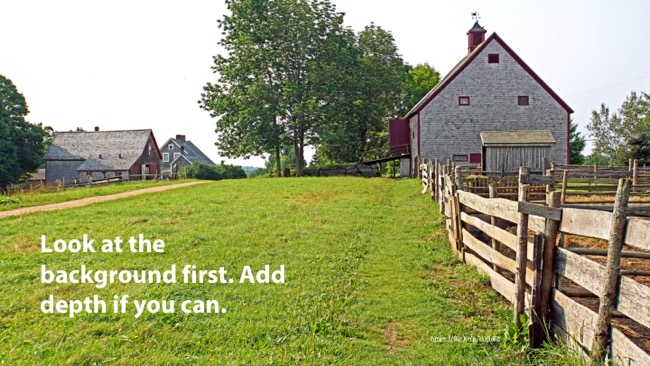 This photo is great because it has serious depth, but he’s also using diagonals to drive your eye to the beautiful trees in the slight right of the center of the photo. Instead of being right up on the buildings, it’s great to walk away and look at them from different angles to see the uniques shapes and lines the photograph is producing.

3. The Rule of Thirds helps your composition. 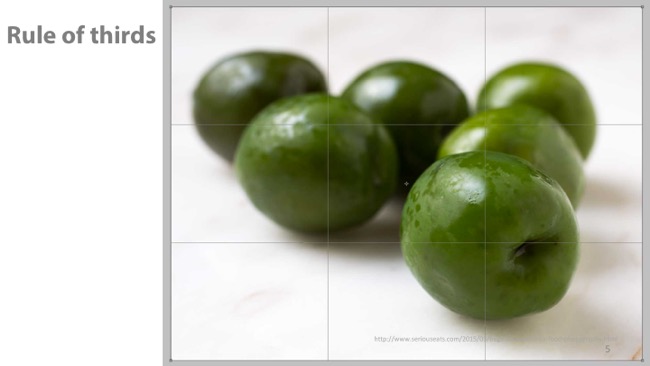 The Rule of Thirds courtesy of The Serious Eats Team

4. The eye loves textures and patterns – getting close can help you see them. 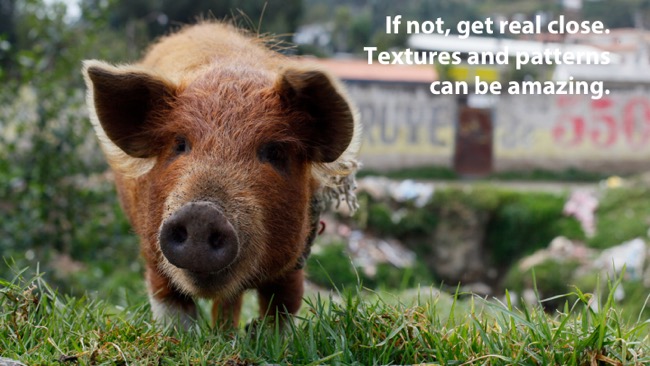 Focusing in on your subjects can produce some amazing shots especially with animals (that people normally don’t get too close to). I love the patterns of the fur and foreground grass in juxtaposition to the background signs. You can also see the Rule of Thirds here as well with the off set subject but the dominate eye almost in the center.

5. With food, you have control over how to dress it up and style it. 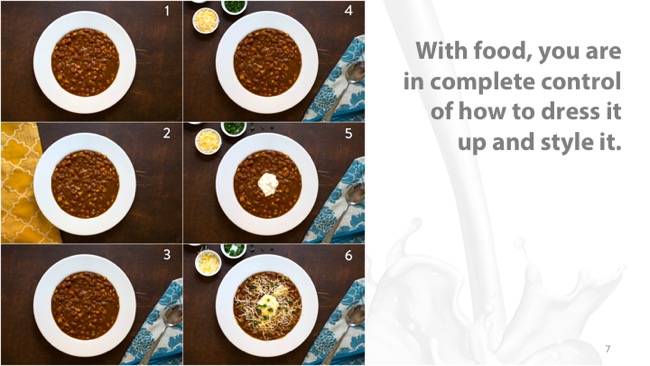 The Serious Eats Team does an amazing job of showcasing how they dress up this plate of chili. I would recommend going over and reading the entire article. What I took from the article was how much control you have over the food. It’s worth the time to invest to get a good shot of the food.

6. Use diagonal lines to guide the eyes. 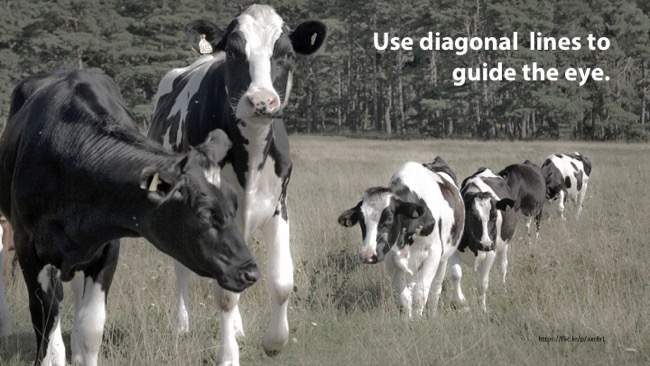 The diagonals of this picture are fairly obvious just like the picture above but I would also take note of the gaze of the animals as well and you can see how their gaze with the diagonals drive the eye to the center of the picture.

7. Use natural frames to frame your subjects. 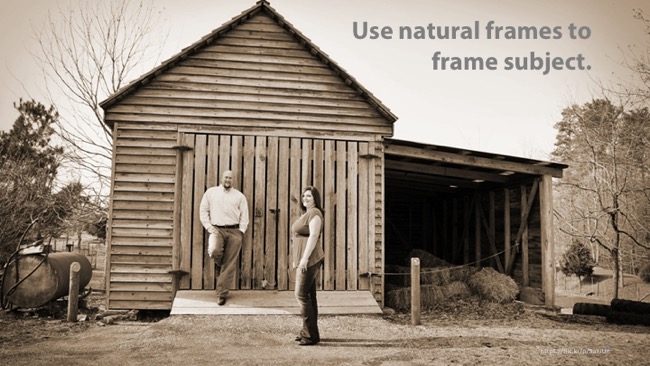 Here’s a great photo that uses a natural frame as well as symmetry and patterns. You can definitely see the subjects (close to Rule of Thirds) framed by the building’s doors and then off set by the lean-to shed on the right. Great composition here.

8. Symmetry is pleasing to the eye. 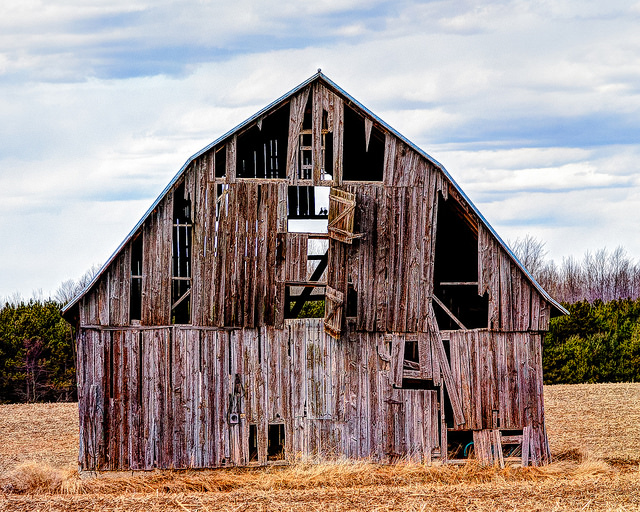 You can see with this photo that the building is almost dead center and looks symmetrical even with the missing boards. But one thing you probably didn’t notice is the natural framing – do you see the two birds at the top. Great composition.

9. Rules are meant to be broken. 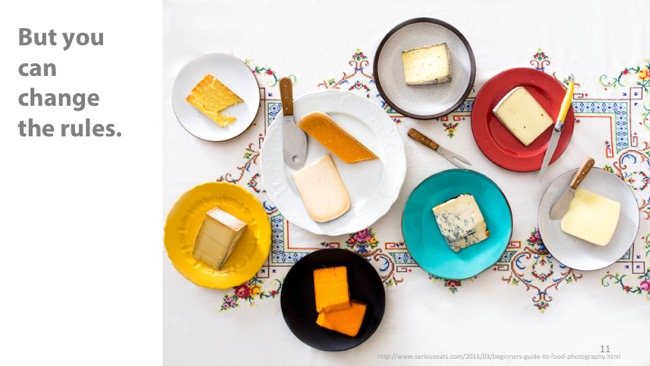 There was a rule a while back about plating food on blue plates because it would make the food pop! That’s not true. It really depends on the food itself and the angle of how you shoot it. Here is a great example of food being placed in a natural flowing way on plates that put emphasis on the food and how the eye is moving around them. And it’s also cheese! Yay, cheese! Great composition by The Serious Eats team. 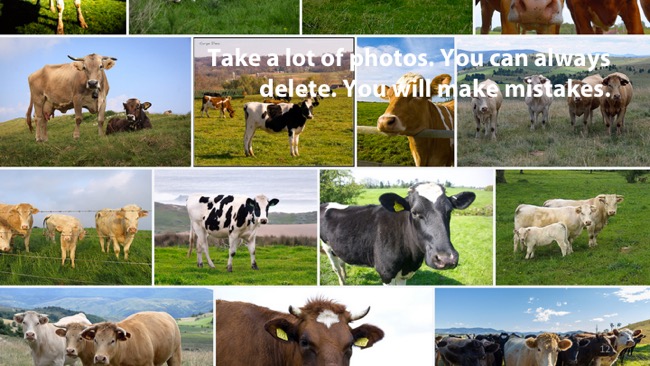 When it comes to good photography, being intentional is very important with your shots but don’t kill yourself over one photo. Take lots and lots of them and sort through the ones you don’t like. That’s what is so awesome about today’s technology. Get lots of practices, definitely take a few classes if you have time and keep producing those amazing photos.

If you have tip you want to share, feel free to leave a comment or email me at don.schindler (at) gmail.

If you want to use my deck, you can download it from Slideshare.