How do you win your wife back? Fight the evil twin. 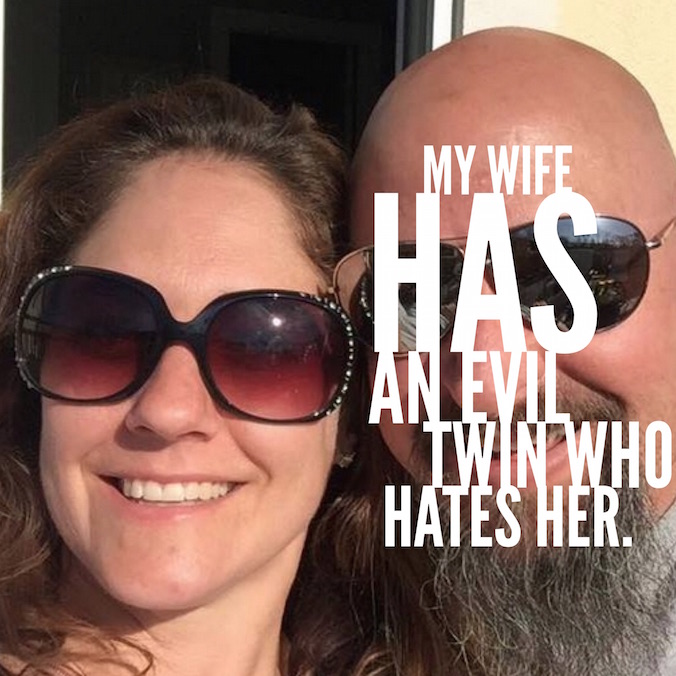 I’m battling the most evil (and excuse me for saying this) bitch for my wife’s well being. I’ll refer to it as the evil twin.

Let me tell you about this twin:

She lies all the time to my wife. What does she lie about?

She cheats my wife as well. What does she cheat my wife from?

And she steals from her. What does she steal?

God, I hate that woman.

And the worst thing about it is that I’m never going to be able to beat that woman out of our lives because it’s literally my wife.

You’ve seen the Dove commercials where artists drew women as they see themselves and then as strangers or their loved ones saw them. Those woman pictured themselves as some pretty hideous creatures.

I believe my wife’s internal evil twin does that to her as well. It sees her not as a loving, giving beautiful child of God but as a hateful, selfish hideous spawn from Hell. How can that person be living inside my wife’s head?

Well, I don’t know and I’m not here to debate the psychosis of this situation. I just finally figured out that it was there and I’ve decided that I’m not going to fix the situation (I wouldn’t know how to anyway) but I’m going to go to war with that thing and I’m willing to battle her the rest of my life.

Normally I don’t write about these things on my blog. My family life and especially my relationship with Jenn is superficial on the web – we don’t voice too many of important life decisions and we definitely keep our issues out of social media.

While I love social, it’s not a place to throw out internal beefs because nothing will ever be worked out online in a public forum. When you do this, you are just asking people to pick sides in a battle that they have no skin in and they will do it. The results are never pretty.

But this is an issue that Jenn and I both chatted about extensively together and have come to some thoughts that might help others. So I thought I would share.

I want my wife happy and healthy – as probably most of you do – and I’m willing to do what it takes. 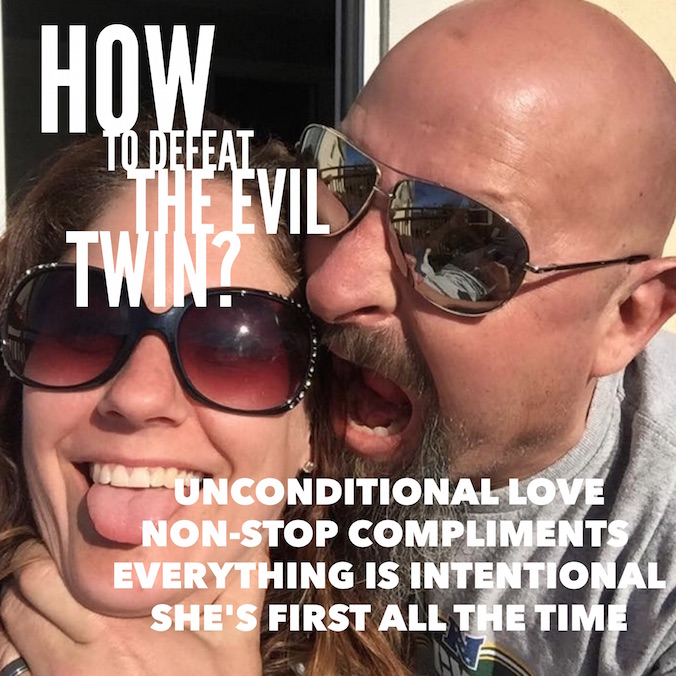 How do I win the battle with the evil twin?

1. Unconditional Love – always assume the best.
That thing in her brain hates her unconditionally. It never relents or fails to bring up her shortcomings. Offering unconditional love to her is not always easy but it’s worth i. It means that I love you no matter what you do to me. I will forgive you for anything. Now this might be easier for me more than most because I’ve never experienced Jenn not being honest and open with me about everything.

How do you do unconditional love?

First, is that no matter what they said or did, you have to forgive without holding anything over them. I know this can be difficult if what they have done was extremely hurtful to you but forgiveness will allow you to heal as well.

Second, always assume that whatever has happened, it did not occur from malice or hate. If I feel like I’m being attacked by her over something, I try and view the situation from her point of view and see where I might have wronged her first by being unloving or distant. Hey, I’m male and I do those things a lot. I try not to but it happens.

To combat this non-stop verbal assault that my wife undergoes daily, I try and compliment her as much as I can. Sincerely. Now this may seem weird and when I first started doing more of it, Jenn tended to react poorly. She’s never taken compliments well and we had to chat about it several times before she would take the compliment with a “thank you” vs. verbalizing what that thing told her internally.

BTW, after we discussed this I found out that the evil twin immediately discounts what I say. If I say “I think you are beautiful”, she says, “he has to say that. He’s married to you.” What a bitch.

Little things are just as big as her great successes so it’s more important to give them all the time and sincerely. You shouldn’t wait to give them thinking that you are going to save them up for those larger meaningful moments. It means more if they are there all the time.

I don’t want you to get the idea that Jenn is superficial and needs lots of compliments to get through the day – hardly. These compliments are for her to know that I’m paying attention to her – that she feels loved – and it’s to offset the verbal abuse she’s giving herself internally.

3. Focus on her like I did when we were dating – everything has intention.
One thing that I struggle with is intention. When Jenn and I first dated, I planned out entire nights – what I would wear, when I would pick her up, was the car washed and cleaned, where we were going, how long we would be there, what we would eat, and when to make the right moves. Now, not so much.

We still do date nights but I tend not to put as much effort into them and then I get called out on them – lack of intention means lack of love and effort. Of course, I don’t always see it that way but she’s right.

Remember the evil twin will come out and use this lack of intention to tell her that she’s not worthy of my attention – which is complete BS but in some ways it’s not. That thing is right – I’m not taking the time and intention to plan the night out, to getting her alone and focusing on her.

I’m definitely a work in progress here but when it comes to date night, I’m trying to get better.

4. She’s before the kids/family – don’t make her feel guilty about you spending time with them as well.
The thing has no problem using her kids against her. When you think about that you realize that’s such an ugly thing to do but like I’ve said before she’s the most evil person I’ve run into so I shouldn’t be surprised when she uses the kids to make Jenn feel horrible.

Quality time / face-to-face time is very important to her and the kids. But remember the kids came after the marriage and they won’t be living with you the rest of their lives. They aren’t your kids anyway – they are God’s children and we are just taking care of them for him.

So the kids come second. I try and set out designated time for the kids every day and I make sure that I’m involved in their lives but the majority of my free time should be focused on making sure Jenn’s needs are met.

I’m not talking about following her around and waiting on her hand and foot. I’m talking about that quality time is defined and she knows when it is and her quality time isn’t sacrificed first when other things come up like helping the kids with a project or working on a vehicle. These unplanned things should be chatted about and shouldn’t be assumed.

Like I said earlier, I’m not perfect when it comes to dealing with the bitch that talks smack to my wife about her failures in everything she does but I’ll be damned if I’m going to give her more ammunition that she can use against her. I want to be there to help her battle that demon not just pick her up after she’s taken a huge hit.

So do you have some good ideas on how to handle the bitch that lies to your wife?

Blowing Up: How to Expand Your Online Influence (Farmer Version)