How To Handle Negative Comments On Your Twitter Profile

Twitter is more the wild west of commenting (though not as bad as YouTube) and you are sure to get negative comments out here. In fact, one of my favorite skits by Jimmy Kimmel is his featured Mean Tweets where celebs read some of the meanest tweets about themselves. I’m a big fan of Clay Matthews and his mean tweet was classic. 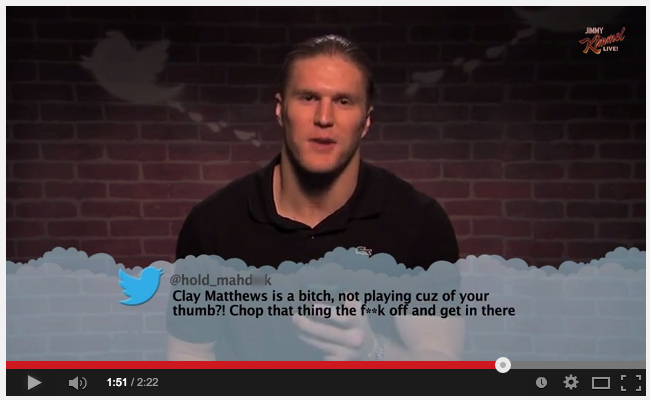 I believe that people are more apt to stay things they would never say on other public networks is because it’s hard to trace who people are on Twitter. They could be themselves and have their name tied to it or they could be using twitter anonymously and none of their family or friends even know they are there.

So without the filters of these other people, tweets can sometimes be flippant, sarcastic, rude, vulgar, joking, or crazy. They might be just trying to get a rise out of you – it could be just about anyone on the other side of that tweet.

So a lot of the rules that I gave you about really understanding who you are talking to is important BEFORE you even think about engaging in a dialogue.

First things first, do these. 1. Evaluate the Messenger 2. Use your listening skills 3. Ask more clarifying questions 4. Be respectful and polite 5. Use your experiences as examples 6. Be on offense, not defense 7. Don’t use jargon 8. Provide links to experts 9. Craft a thoughtful response 10. If you don’t know, tell them 11. Find some common ground 12. Thank them for speaking with you.

I want to add a few more things about the evaluation. If you click over to their profile and don’t see a large following – DO NOT THINK THEY ARE NOT INFLUENTIAL. Just because they don’t have many followers, doesn’t mean that they don’t influence others.

You should treat everyone with respect and understand that their tweets are limited in characters so things they may be trying to stay are coming out as harsh or blunt. They may not mean it – it’s just the limitations of the network. Definitely pay attention to the emoticons. 🙂

But if you determine the negative comments are real, here’s how I would handle it.

Ray Prock is a farmer friend and I would never think that he sucks. Just an example.

1. Can others see it? If someone responds to me after I post and they have replied to me like (@donschindler you suck!) if the @donschindler is first then the only people that can see this post is me, them and the people that follow both of us.

Now if they put a . in front of the handle like this .@donschindler then all of their followers can see it. My followers wouldn’t see this because they only see what I post and as long as I don’t respond in a manner with the . then only they will see it and our mutual followers. 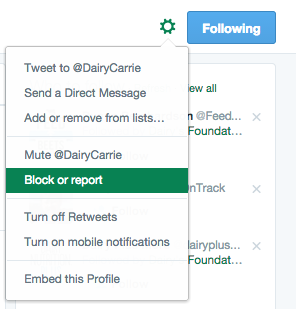 Go to their profile and click on the little GEAR symbol to block.

2. If it’s negative and they are just going after me and not really asking or engaging in a conversation, then I just ignore them. There’s really no reason to waste the time. If you don’t like getting the notifications of your twitter handle being used, you can always delete and block.

3. If they are going after me and they are using the same hashtag as most of the audience we are both trying to influence, then I may engage using questions, apathy and taking the high road. Remember this conversation is actually being viewed by all of those following the hashtag whether they are replying to you or not. The win is usually not convincing the other person but more about the audience seeing you as kind, honest and credible.

BTW, DairyCarrie is a great friend as well and I would never Block or Report her. 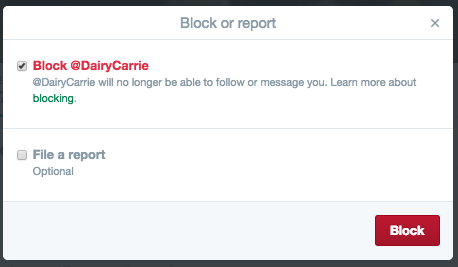 4. Worst comes to worst and they won’t stop harassing you – just block and report them to Twitter. This is always the last resort, though.

Are there any techniques you use on Twitter to deal with negatives? If so, just hit me up on Twitter and let me know.

If you have more questions, feel free to reach out as well.

How To Handle Negative Comments On Your Facebook Page

How do you become a farmer rock star?