Does Your Future Depend On Your Social Media Etiquette? The Do’s and Dont’s of Social

I recently gave a presentation at School Nutrition Association’s National Leadership Conference in San Diego. I had a great time and actually got an “I love you” out of the audience (first time for that).

I wanted to share some of my notes from the presentation because a lot of it was common sense that people need reminders on. Especially when it comes to social media. I wish I could have spoken to this Concord coach before she did this.

So here’s my do’s and dont’s on social media.

Does Your Future Depend On Your Social Media Etiquette? from Don Schindler

I like to start a presentation like this with a video that shows how strong of an influence that digital and social play in our lives. 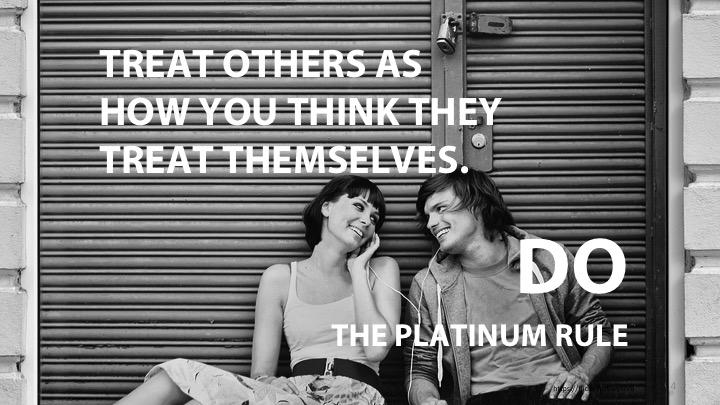 We rarely treat another person better than we do when we are in love with them. This is the platinum rule.  Focus on them and meeting their needs. 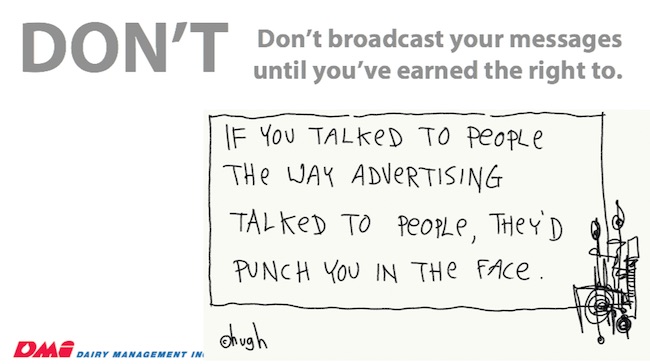 A big mistake is that just because you think it’s important to get your message out right away – it’s definitely not the first thing people are wanting you to do. They want you to be part of the conversation and figure out if they trust you before they decide they want to listen to your message. If you’ve earned the right, then you will be heard. 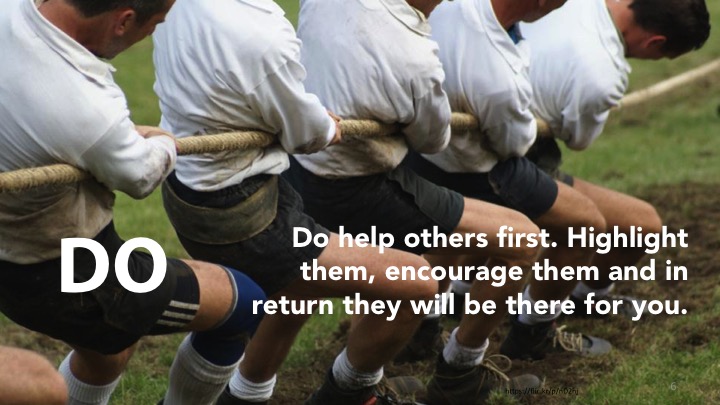 When you help others, they tend to like that. If you highlight them and encourage them, they like that even more. You shouldn’t be worried about it coming back to you but it usually does. People don’t remember what you say or do but they’ll remember how you make them feel. Make them feel special. 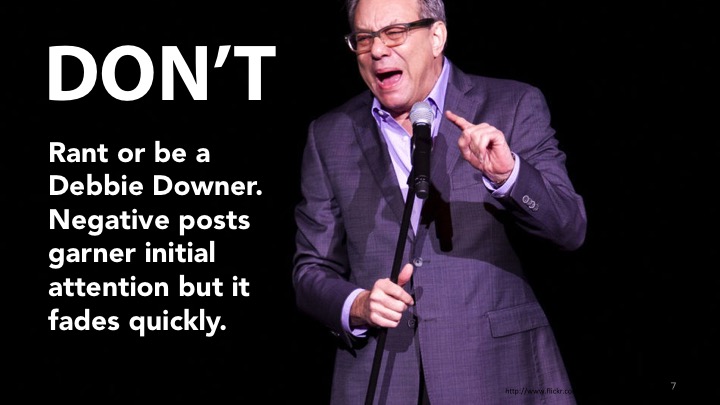 It’s hard not to rant on social. In fact my buddy Jay Baer is writing a book on Hug Your Haters, which I’m sure will be awesome. He calls it a spectator sport.  But I say don’t do it. Two reasons: 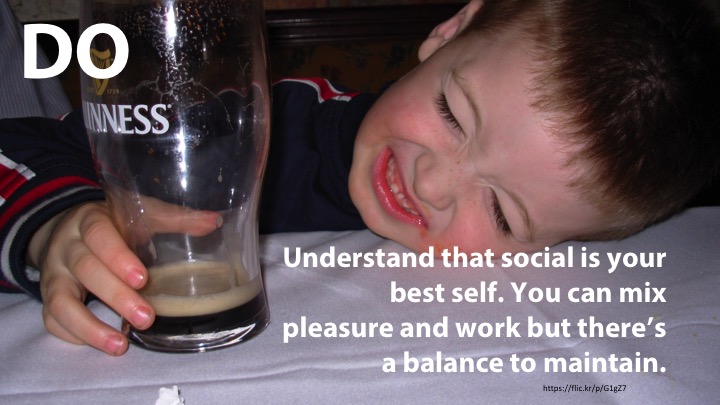 You shouldn’t be a robot either on social. There’s a balance to all of this but people need to see that you are a real person. If you never mix business with pleasure then no one is going to pay any attention to what you are saying. Be real but understand who you are trying to portray with this digital life. 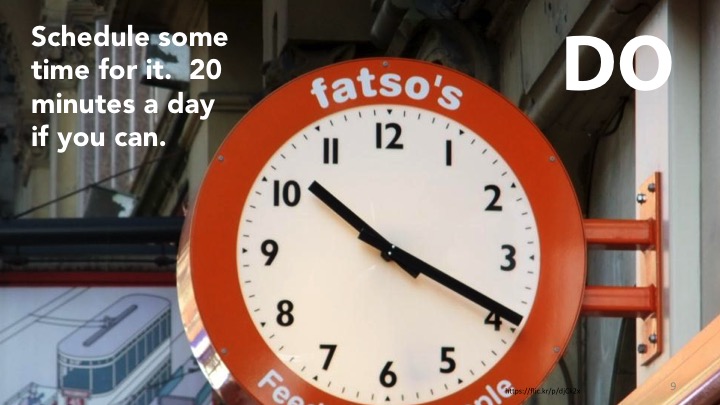 What gets done during your day? If you are like me, it’s the stuff that is scheduled in your calendar. If you don’t schedule in social media, it’s not going to get done.

I try and make time for it throughout the day but if you can’t, the first 20 minutes of your day can be prime to get some social done. Especially using cool tools like Buffer. I highly recommend this. It can make it look like you are taking the time throughout the day to be productive in social. 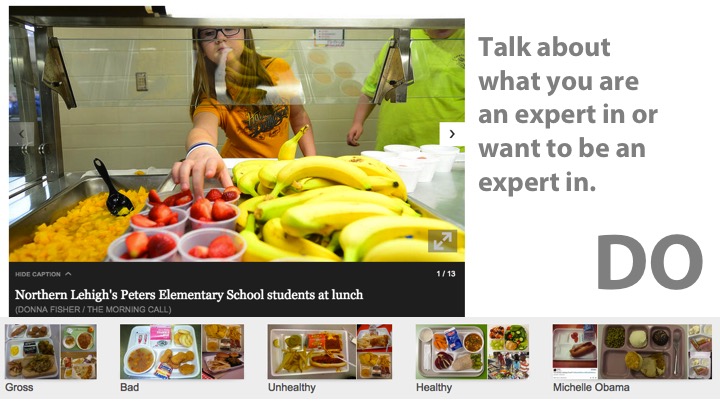 People don’t know if you are an expert or not until you prove to them you are (or not) one. But if you don’t use social media, then they won’t hear you anyway. Your title does not define your leadership – the fact that you care and are willing to put yourself out there and lead people does.

You have an audience to influence. You can try to do this one at a time via email and phone calls or you can use a blog or social profile and reach so many more. It’s up to you but I can tell you that if you aren’t out there, there are people willing to fill in the gaps. Like her below. 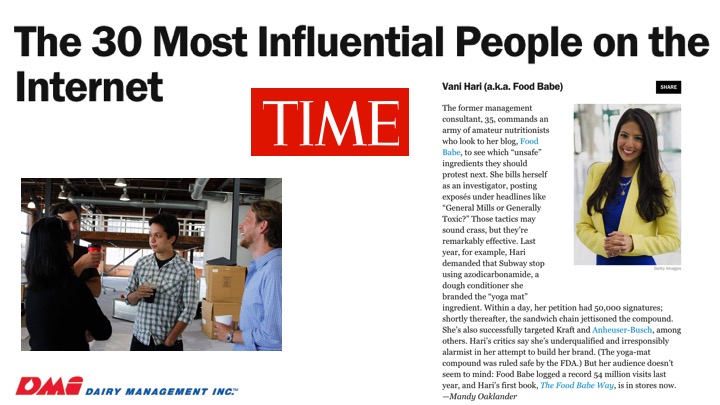 This is not HER fault.

You can blame the Food Babe all you want but she took the time to listen and then lead the charge. I can’t fault her. I could put blame on all the researchers, food experts and scientists that you should have not let her fill the gap but I won’t.

Most experts know what to do now – you need to get out there and preach the good word about good food backed by science and emotion. Most of these people are diet fads – it will fade in time but it didn’t have to be this way. 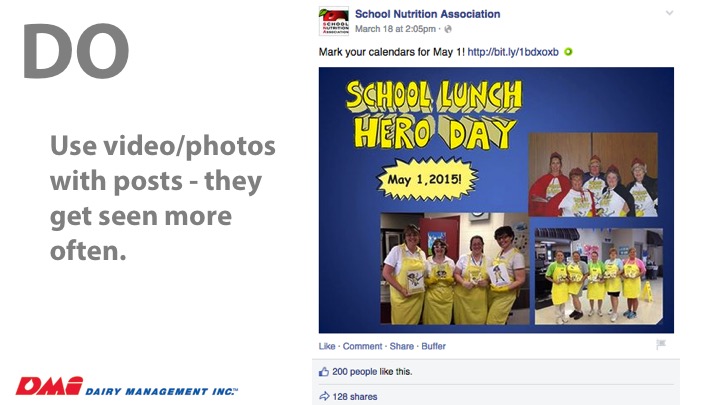 Facebook favors video. Why? Because people will stay on their site longer to view videos (common sense, right?). So what should you do? Make videos if you have a message you really want people to see/hear and upload it natively into Facebook (don’t just upload to YouTube and then share).

Video is much easier to do than in the past. One of my favorite apps for video is iMovie and it’s a lot easier to use than you think. 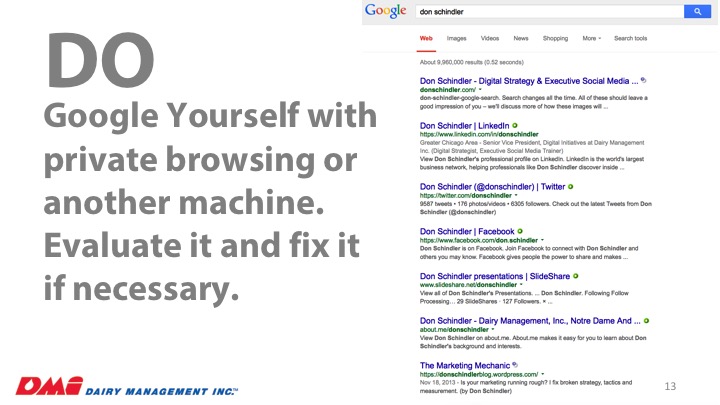 When people first meet, what do they do immediately afterward? Especially if they are interested in them in a business sense (sometimes romantic). They GOOGLE them. Are you happy with what Google says about you? Do you know how to change it? Tip: you can’t change what Google displays but you can fill Google with more content that hopefully pushes the bad stuff down.

Google is your homepage – not your website or social profiles. People Google you first. 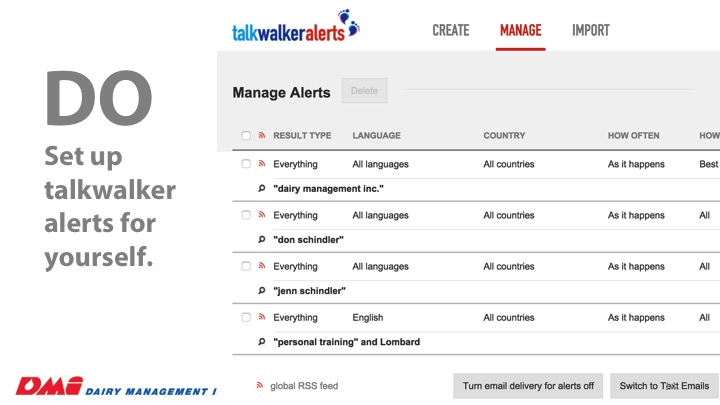 You should know if Google has something new on you. Use Talkwalker Alerts (FREE) to monitor for your name. It’s not hard to set up and it works relatively well. 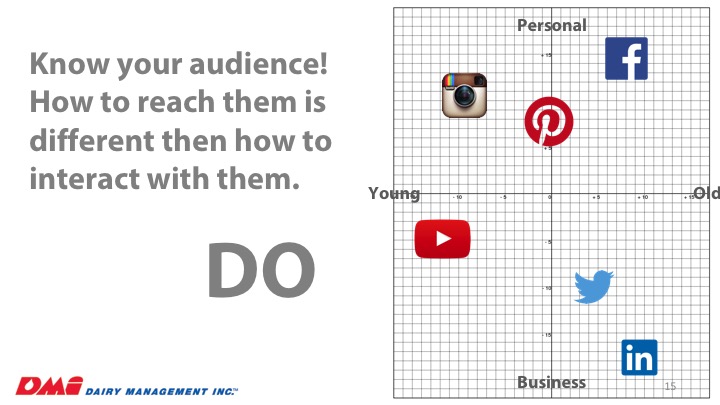 If you want to reach people in their social areas, then you need to know which network they hang out in. If you don’t know that then stop using social until you do. How do you find out? I don’t know.

Did you ever think to ask them? Or you can use research? The graph above displays my thoughts and experience on where young and old people are at in social and what they use it for (personal or business). Most networks blend both. 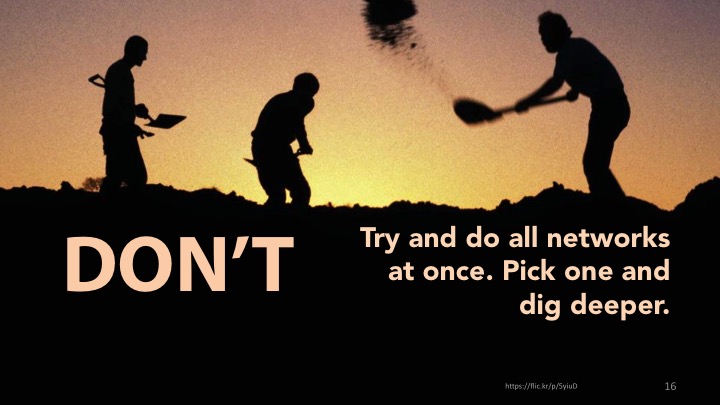 You honestly don’t need to try and do all the social networks at once. Pick one and go deeper in your use (HINT: it should be the one your audience really likes to use). 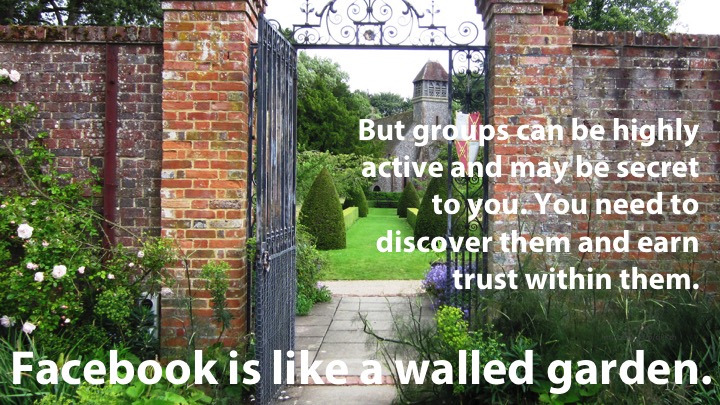 Personally, I love Facebook for its interaction with my friends. I seldom interact with brands there but I know I can. The problem with Facebook is that it’s not an easy place for business pages to get stuff seen UNLESS they have money. But the groups out here can be wonderful for engaging and getting your fans to see your content. 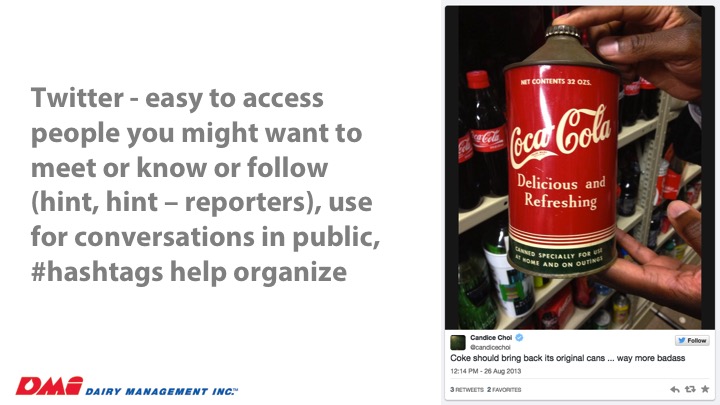 The best thing about Twitter is being able to connect with people that you had no right to in the first place – like reporters. They are all on Twitter and understand the major importance of interacting and building a following. Use this to your advantage.

Twitter can also be good at getting people organized around a rallying cry. Just be careful it because it can bite both ways. 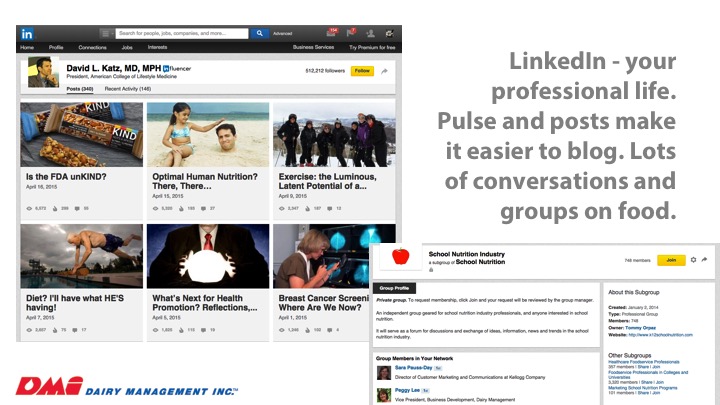 LinkedIn is an easy network to maintain and it’s the most professional of all the networks. It’s also one that is probably going to have the least amount of engagement – unless it’s on blog posts. I’ve seen a lot of great content there. Blogging on your own place and sharing inside of LinkedIn can give you more visibility than you think. BTW, join more groups. Groups help your profile to be found. 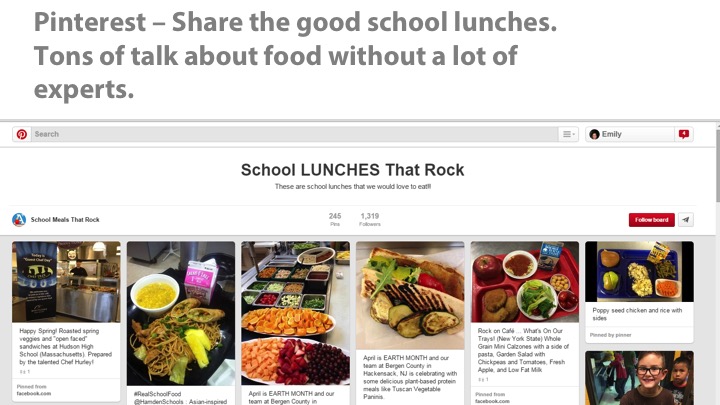 Pinterest is such a hot network right now especially for food. But it lacks experts. You can be that expert pinning good food and answering questions. This is where people search for good food – not Google. 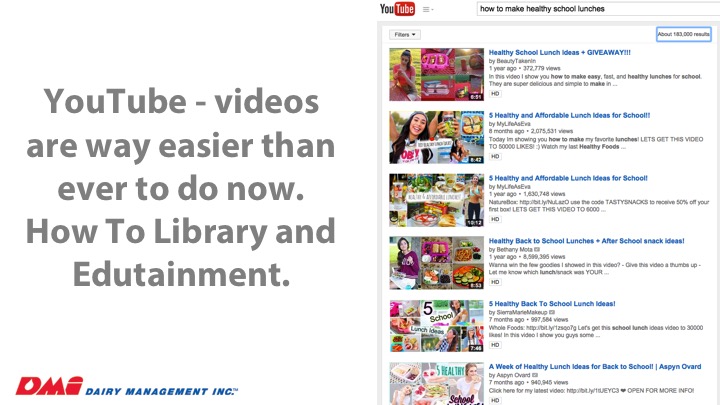 If you want to know how to do something and you don’t know how, just YouTube it. It’s a Do-It-Yourselfer’s dream. But the videos can’t be stale and I would even say that traditional videos have a harder time being found and liked. Make every video fun and engaging. 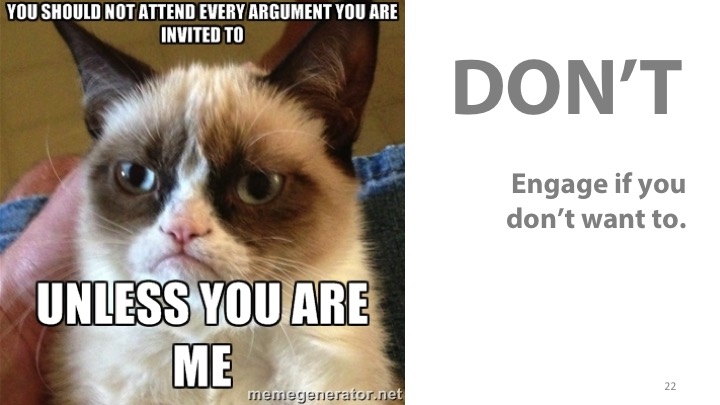 Is it ever worth it to argue on a social network? Nope, not that I’ve seen. Is it entertaining to watch? Yep. Is it fun to participate? No way. You shouldn’t have to fight on these networks and I would discourage it.

Sometimes it will make you feel better in the short run but over time it’s going to eat away at you. Remember one of the first lessons about the “Platinum rule”. It’s hard to do that when you are flaming another person. Just step away from the keyboard until you can calm down. 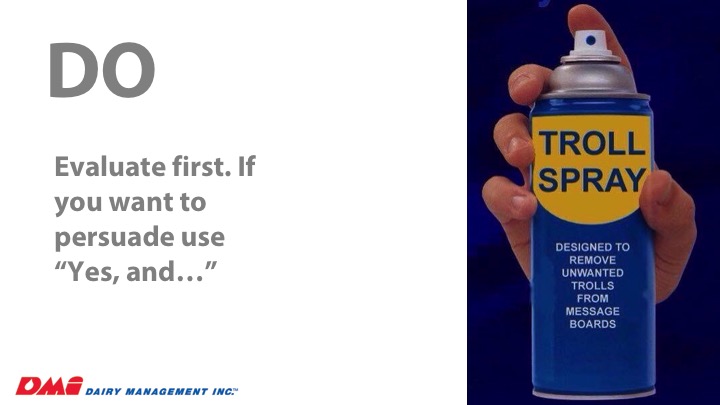 If you want to persuade someone, you must elevate who they are and the position they are taking. If you think it’s worth going after, then follow the old salesman’s rules. Never let them say “no” (always give them stepping stones they can easily say “yes” too and then you can lead them where you think it will be a “win” to both you and them. If this isn’t possible, just walk away. 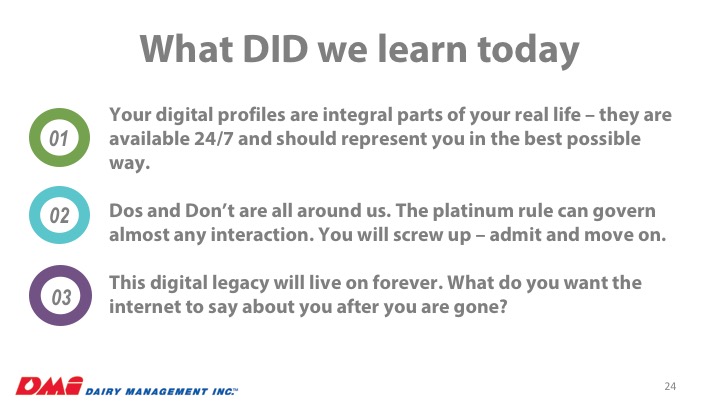 Well, that’s it. There’s always a ton of other stories and what-not that I throw into this presentations but you get the gist of it.

If you have any questions about anything I went over, just give me a holler online. I’ll be here like I always am.

How do you make a movie with the iMovie App on the iPhone 6?